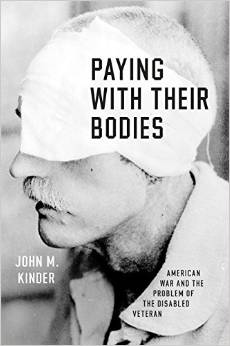 My first book was published by the University of Chicago Press in March 2015.

It was recently named by Flavorwire one of the “Ten Must-Read Academic Books for 2015.”

It is available for sale (hardcover and e-book) at Amazon.com and the University of Chicago Press.

Praise for the Book

“Kinder convincingly shows the stubborn persistence of American discourses about disabled soldiers despite the extraordinary variations in the wars that produced those soldiers. He resists unduly flattening things out—things do change as the wars change. But anyone following discourses about the disabled of post-9/11 wars will find much that is familiar, and much that is powerful, in this account.” Michael Sherry, Northwestern University

“For the wounded soldier, the shadow of war extends long after the shooting stops. By placing the disabled soldier at the center of the history of American warfare since the Civil War, John M. Kinder has provided a disturbing and important account of this country’s engagement with war.”Jay Winter, Yale University

“We hear a lot about the ‘human cost of war,’ but Kinder’s book not only exposes us to its dismembering horror, but also asks us to follow disabled service-personnel back into the civilian world after the war, where they struggle to reinvent their lives. It is a compassionate account of terrible suffering, which many veterans don’t survive. The big question remains: why have we still not learnt the lesson of war?” Joanna Bourke, University of London

“Kinder has written a powerful and essential history of how disabled veterans came to be seen as a ‘problem.’ His unflinching accounts of battlefield injuries illuminate the social costs of war. The impact of disability—from Civil War amputations to World War I ‘shell shock’—was driven not only by changes over time in combat, but also by the way injuries were viewed at home. War injury was drawn upon in both pro- and anti-war political struggles, and scandals over veterans’ care periodically rocked Washington. Veterans organizations like the American Legion divided over whether veterans with disabilities needed paternal care or self-empowerment. Ultimately the ‘problem’ of disabled veterans went beyond the need for services. They embodied war’s ongoing impact, complicating cultural and political efforts to leave war behind. An important contribution.” Mary L. Dudziak, author of War Time: An Idea, Its History, Its Consequences

What are the nation’s obligations to its disabled veterans? And at what point does war’s legacy of disability outweigh the nation’s interests at home and abroad?

Paying with Their Bodies seeks to answer these questions by examining the history of disabled veterans in the United States from the Civil War to the present. It focuses on what early twentieth century commentators called the “Problem of the Disabled Veteran,” a perceived crisis about the place of disabled veterans in modern American society. Before the mid-nineteenth century, disabled veterans were considered little more than an unfortunate by-product of battle. Venerated as icons of patriotic sacrifice, permanently injured soldiers were expected to return to civilian life with few demands upon the American public. By the start of World War I, however, Americans’ attitudes toward disabled vets had started to change. While disabled veterans continued to be singled out for public praise, many in the United States came to associate war disability with a host of social ills: pathological dependency, compromised masculinity, and the crippling legacies of foreign intervention.

Since that time, disabled veterans have been at the center of two competing visions of American warfare. The first imagined the disabled veteran—and his successful reintegration into postwar society—as proof of the United States’ ability to limit, if not eliminate, the physical and social costs of war. It also offered a more tantalizing promise: war without permanent injuries. The second cast disabled veterans as portents of a terrible new age of unparalleled violence and suffering. Although this vision would be dramatically altered during World War II, it nevertheless remains central to many Americans’ understanding of the threat posed by foreign war-making: to leave U.S. soil under arms is to risk mutilation, disfigurement, disability, and death.

Drawing upon medical records, soldiers’ writings, government policies, and popular culture, Paying with Their Bodies analyzes Americans’ efforts to come to come to terms with the inevitable violence of modern warfare and the permanent injuries suffered by those who fight on the nation’s behalf. Ultimately, it contends that the decades surrounding World War I marked the United States’ most sustained examination of the relationship between war-produced disability and America’s future military endeavors.